I have been experimenting with 4P functionalities and here's what I know.

If I set these flags...Then I can read P1B and P2B inputs however they are just mirrors of P1 and P2 inputs...

On the trivia side of things I attempted to get Kizuna Encounter running with 4 controllers on Mame to no avail.
Does anyone know if Mame is capable of processing 4 separate inputs for Kizuna?

On the trivia side I can confirm that it is indeed possible to play Kizuna with 4 separate inputs via mame!
I was able to verify this with Mame 0.238, Kizuna and NeoGeo Bios set.
The trick is to load the clone kizuna4p! Easily accomplished if you use the mame UI to launch your rom.
Upon pressing TAB once the game is loaded you will see the game has 4 mappable inputs!

Update - Blastar - summitted a tip if you are playing kizuna 4p you can rename the uni-bios to match one of the supported bios names then you will gain access to all the uni-bios functionality!

Information regarding the Hardware that shipped with the Kizuna 4 Way Battle kit can be found here:
https://wiki.neogeodev.org/index.php?title=NEO-FTC1B_board

For arcade and supergun play 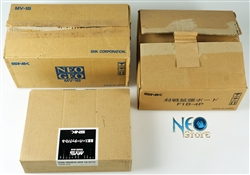 2. Looks like a group is actively working on a NEO-FTC1B and maybe you could get in on the action!
Neo geo Kizuna Encounter 4p boardArcade-Projects ForumsI know of the NTM repro but has there been any work put into a more widely available repro board? Is this on anyones radar as a project at all?

For arcade, supergun and AES play!

3. My favorite of all options has to be our own HPMAN's Neo.4P board!
This board is capable of connecting to arcade and AES systems alike.
For more info on the board
NEO•4P manualGoogle DocsNEO•4P The NEO•4P board is a 4 player adapter for NEO•GEO and MVS systems. It mimics the official FTC1B board, adding compatibility for a wider range of systems. Base NEO•4P kit comes with: NEO•4P board OUTS cable NOTE: Some setups require wiring this cable on your system. Do at your own ...

I was able to put a tech demo together with 4P Functionality please see it here:

The 4P devices work with the pinouts of controller ports. If you want to program 4P games, you must activate/deactivate the pinouts to select which controlers your want to watch.

The information was scattered and took a bit of digging I thought it best to compile my findings so people interested could use this thread as a reference to 4P programming strategies and the emulation of the FTC1B board.

To my knowledge Kizuna is the only commercially available 4P game.
That said if someone were to program a 4P game, one approach would be to make the game compatible with the FTC1B that ships with Kizuna.
If Kizuna 4P is playable via mame then the FTC1B is emulated via mame and someone should theoretically be able to test their 4P game with FTC1B board emulation that the Kizuna4p clone supports.

Findings show that a command line launch of Kizuna4P works.
mame64 kizuna4p
However this command line launch does not work. For two reasons:
1. There is no KIzuna4p clone implication in the neogeo.xml and 2. Even if a clone listing is fabricated Kizuna will launch but the FTC1B emulation is absent.
mame64 neogeo kizuna4p
That said the FTC1B logic appears to be hardcoded in the neogeo.cpp logic.
After reaching out to blastar and better understanding the problem, one solution that I really like is a hacked version of mame that has the FTC1B emulation on at all times not just limited to Kizuna4p.
If anyone is able to take a stab at building such a thing I think it would be very helpful for devs experimenting with FTC1B emulation.
Until that day comes replacing the kizuna roms is the only option with a stock version of mame.

If your project was to include support for the FTC1B board your real hardware options as I see them are original hardware/reproduction hardware. (listed above)
I do in fact have HPMAN's Neo.4p board but I misplaced the data sheet on it. I was unable to find it via my web searches, HPMAN provided access to his documentation.
I am so happy to have regained access to this doc it is definitely great to have and very helpful for understanding the configurations required to support the various Neo Geo Hardware.

It is known that not all bios versions are compatible with the FTC1B board so people with a physical board of some type may still not be able to access 4P functionality.
If I had to guess I imagine your 4P board aimed to eliminate a unique bios requirement and possibly simplify the circuit?
If this were possible it would be a great option to have as the bios would no longer be a factor in enabling 4P functionality.
If you had codez you are willing to share regarding capturing joystick inputs for P3 and P4 that would be neat to see your approach on the matter.
It would be great to see your device specs outlined in this thread! It is very cool you have innovated a unique solution to this problem of 4P's!

In my case I'm really excited knowing Mame does have support for the FTC1B board and we can actually emulate the 4 inputs for testing purposes.
As I get more updates I'll be sure to post!


The hardware I used costs 20USD (including 10USD just for the 2 female DB15 compatible with the deep Neo Geo male ports).

Can you still read the inputs via your device if you.

It is amazing that you you are able to create such an economical circuit!
If you are willing to share its workings I'd love to hear more.

I'm not sure why you asked me to stop talking you had asked me a question and I gave you my best answer.
It is indeed possible to program a demo for emulated FTC1B and real hardware/clones.
In my case I'm just taking my time and documenting my findings along the way.

With your help we can make this thread very helpful for others wishing to access the 4P powers!
Congrats again on your innovations!

Mega Shocked 2021-12-05 at 12:02am
Have you released your adapter/beta testing? Maybe if someone has one they can test on their system with the unibios?

But after looking to the FTC1B wiki page, I can say at 99% it will not work.

blastar 2021-12-05 at 10:03am
If i understand correctly then Mega Shocked just wants to document the FTC1B and verify it with a techdemo. if the board is emulated correctly in MAME then it should be ok to develop a proper test program there as well - I have deep trust in MAME and think that it will work on real hardware too.
in theory a patched version of this board should also work on the AES too but only with UNIBIOS... and the dependence on it would be a real showstopper (for me). however, it should also be possible to use the FTC1B without direct bios support.. i'm not sure.

This system must be duplicated on port 1 and port 2 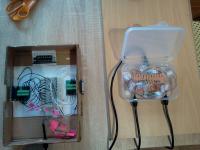 And a PCB version 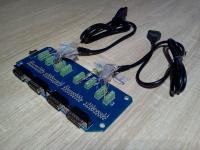 As far as I remember, the drawback of this system is to not work with the CD pad (actually any controller using the VCC)

blastar 2021-12-05 at 12:42pm
and works great... but i have not yet been able to identify an easy to realize game concept without competing with neotris4p!

the benefit of Mega Shocked work could be that it would be easier to create a 4player mode with a suitable MAME driver and to debug it... in the final version only the few lines for the input would have to be exchanged.

I don't care for Kizuna support and FTC1B compatibility. Actually who owns them ?

All single screen platformer game should extend to 4P too (Mario Bros, Bubble Bobble, Pang, Zupapa, ...). They can be in cooperative or competition mode.

Mega Shocked 2021-12-06 at 06:27am
totologic! Thanks for sharing your schematic this is exciting stuff! You put alot of work in to get that rolling! Solid!

I love it all! On one hand supporting the FTC1B standard ensures all 4 player Neo Geo games are supported! If a game were exciting enough maybe HPMAN would consider doing another run of his boards!

By the same token if no special bios were to be required that would be quite the feat! Moving beyond Kizuna if a standard could be made it would be great to have a universal adapter for all new titles! I agree withe points you mentioned.

Regarding your game ideas they are all great but now you opened a can of worms by mentioning the one they call bomberman. Saturn Bomberman supports several players!
Do you think a tap with more than 4 players might be possible? I know its crazy talk but I had to ask! I'm thinking since you opened this all up with NeoTris what could be next!

I realize that the trick with Bomberman is a high resolution and we have 320x224 so maybe the idea of something like a 8 player adapter might not work out so well. Does Neo Geo have any untapped resolution tricks I wonder?

Come to think of it scaling a 512 map and making 8x8 tiles might be a decent way to fit more on the screen. Make the bombing field a bit bigger lol.

blastar 2021-12-06 at 07:31am
of course a multitap with more than 4p is possible but it would be a huge work to verify this on every hardware/bios combination.
the low resolution is the big drawback for 4player games, not only because of the playing field but also to draw a decent HUD for all 4 players.
but for a bomberman clone this should not be a problem, 16x16 tiles work very well, the original arcade version has a similar low resolution, no reason to change anything.
furthermore, with 8x8 tiles you need much more sprites and you are more likely to reach the sprite limit... and it looks awful!

Mega Shocked 2021-12-06 at 02:18pm
Just by you saying the 8x8 will look awful I want to try it lol. Then you will say see I told you so!
Thing is thinking about it if you used a 320x224 image with 8x8 tiles you would only consume 20 sprites. Yes you would need to be careful to organize the sprites in 16x16 swappable clusters but if you did not use scaling I think the sprite limit could be quite manageable.

It seems the big draw back currently is bios and possibly hardware revisions. Although some will not want to touch this side of things I have a simple stance on the matter.

If we ever see the days of conventions/meet ups your game will be played and fun will be had!

1.Blastar submitted a tip regarding getting uni-bios functionality while playing 4P Kizuna!

2. I was able to get a little Tech Demo together displaying some 4P functionality using HPMan's Neo4P adapter.

Challenges - Having trouble decrementing credits for P3 and P4 - I played around a bit but I can't seem to get the credits to reduce when P3 and P4 join the party. For this reason AES mode is featured in the video.

Unable to test the Tech Demo via Mame due to complications enabling the 4P powers when the rom is loaded.

Hope everyone is doing great! Did anyone notice Ganryu 2 coming out!? How random and awesome lol
Help Rules Contacts Credits Built with yAronet 62 ms