The question is: How can I optimize the ASM code? It's possible?


it is you who made the graphics? (Yes I find it strange to the 8-bit game on neo geo

The question is: How can I optimize the ASM code? It's possible?


it is you who made the graphics? (Yes I find it strange to the 8-bit game on neo geo

Thanks Kannagi,
the graphics are ripped from the Phoenix's ROM.
The real objective of this little project is a working Z80 emulator for NeoGeo hardware with some '80 Arcade Classics to play

Hi Blastar,
in NEOPHOENIX (or NGCDSGA concept) it's impossible rendering gfx "on the fly" like in MAME because 12Mhz isn't enough, so the tricks are:

freem 2016-03-31 at 03:12am
looks like various bootlegs of Phoenix, as well as two other games called "Pleiads" and "Survival", according to MAME

blastar (./66) :
that's alot of work and not flexible, are there any other games for this hardware?

Yes, that's a lot of work and not flexible but it's only for funny, learn, no commercial purpose and see what NeoGeo HW can do in different directions so far tested.
I like this kind of experiments on underrated hardware despite my almost nonexistent spare time. I know so little about NG hardware and ASM dev, I need to learn still a lot.
Like freem says there are Pleiades and most obscure Survival (by Rock-Ola Mfg. Corp. 1982) , these games can be tested under the actual NG Z80 emu after gfx rip operation (not still standalone tool exists, I have to automate this process for general ripping).
I want to test another Arcade that I loved so much in 1982 EYES EYES ( Digitrex Techstar 1982), I think this task has minor problems to solve because no scroll....I hope..we'll see 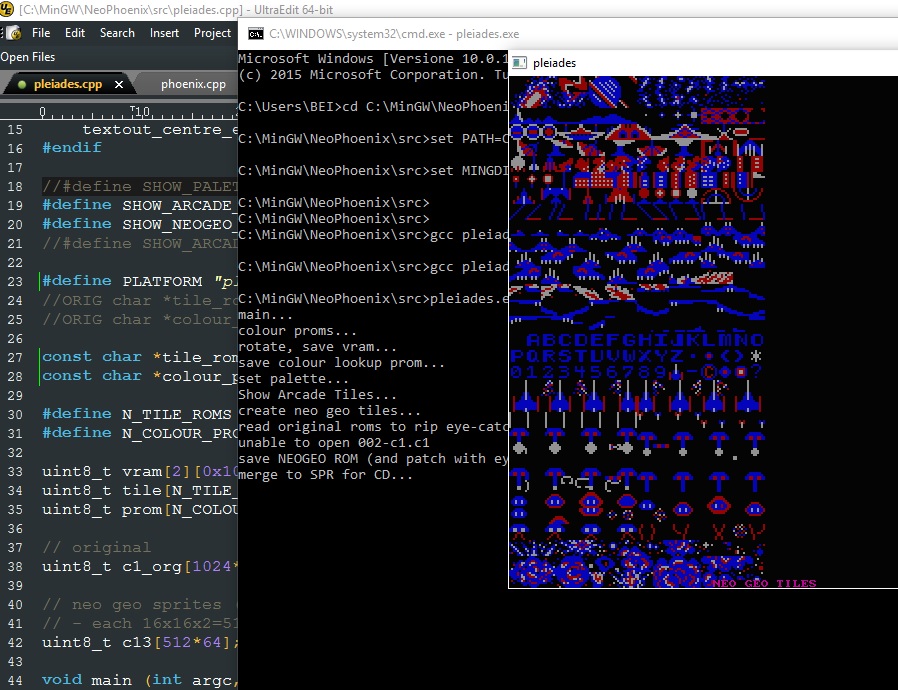